If you're like me and previously purchased the SNK NEOGEO Mini back in 2018, you might have seen the Arcade Stick Pro and figured it is just another similar device. To some extent, you'd be right... this is an emulation system that houses a handful of popular SNK games that you can play on a modern HDMI TV. On the other hand, I'd argue that the ASP is a much better product for the typical fan who wants to play the device rather than collect it, so long as you have space to store the larger form factor. 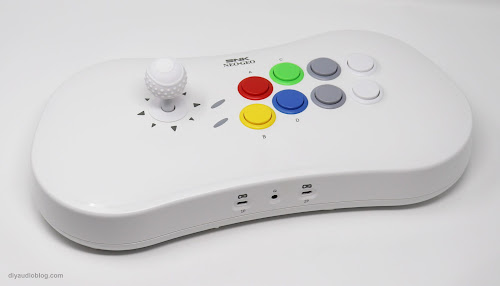 One, you'll notice right off the bat that the HDMI output is far better looking than the NEOGEO Mini with crisper edges vs. the slightly blurry NEOGEO Mini. The second is rather than having a novelty mini arcade unit, you get a very solid joystick instead with nice clicky movement, responsive buttons and some weight to it.
Opening the unit up, you can see that SNK did not take shortcuts when they designed the unit. There's a metal plate on the bottom to provide that much appreciated extra weight, a clean layout and plenty of reinforcing pillars that make the stick very solid and sturdy. As a bonus, SNK set up the interior so you could easily switch out the buttons and joystick for aftermarket options should you wish.
Personally I'm not the type that can tell much difference between a Sanwa stick vs. a Seimitsu stick or any other arcade brand out there. I don't play competitively so any enhancement to my guiding a character around the screen would be minimal at best. That being said, I love to mod things and this seemed like a fun little project to kill a couple hours and would hopefully make an informative post.
The first (and actually most time consuming) part of the mod is to remove all the little plastic bits and screws from the bottom of the unit. I'd advise you put them all in a zip-lock bag so you don't lose any. 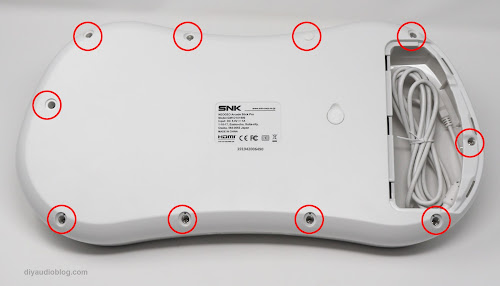 Once you have all ten screws removed, you can separate the top from the bottom. Below you will see the stock unit with the included joystick with square gate. Highlighted in red are screw holes that SNK included purposefully so you can install an aftermarket joystick. 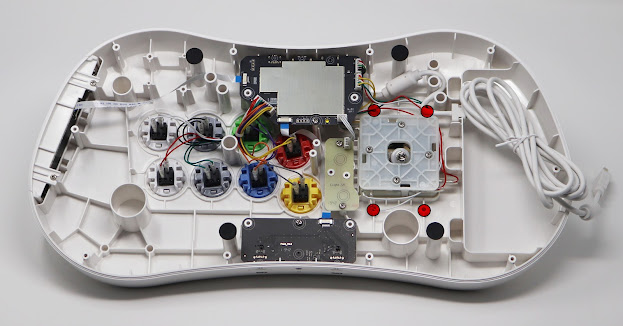 Removing the buttons is very simple and straightforward. You put a little bit of pressure on the center of the metal tab connecting the wire to the button. This dislodges a small metal protrusion that holds the tab in place via the little gap on the button contact. You can then remove the metal tab and wire from the button. Do not force these off or it will damage the metal tabs and you will have to bend them back in place or replace them. With the wires out of the way, you can use a channel lock wrench to press against the two sides of each button at the same time to clear it through the opening.
Replacing the buttons is even simpler, just pop them in place and replace the connections to the corresponding buttons. If you forgot what color goes where, simply use the image above as a reference. I personally used the Seimitsu PS-14-K buttons from the bounceback series just because I liked the concept that the buttons bounce back quickly if you were playing something like King of the Monsters and needed to win a grapple or something. You'll notice in the image below all the buttons are lined up identically in orientation, this is just for neatness and not required. 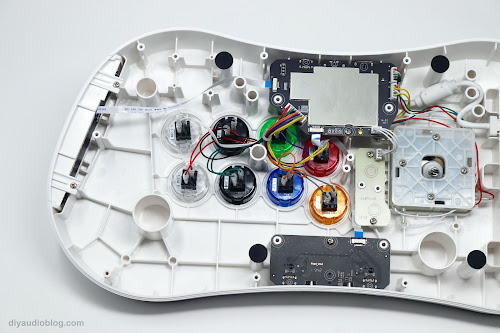 The joystick requires a little more effort, mostly because you probably won't be able to find a current replacement joystick with the quick-disconnect tabs. For the joystick to mount within the Arcade Pro Stick, you'll need the MS style mounting plate. This will run $3-4 depending on where you get it. The joystick I chose is the Seimitsu LS-58-01-CR-SS, which is the LS-58 (a popular mid-ground stick) with red hardware and a 5 pin wiring harness socket. If you are having trouble finding the stick you want, you can replace the spring to a different weight without much issue. Also with the Seimitsu units, you can change the gate on the back. I chose a circular gate (called an Octoplate) rather than the square one it came with. Better for dragon punches I assume...?
Before you remove the joystick, set your multimeter to continuity and set the probes on each of the four pairs of metal tabs where the quick disconnects are. Move the joystick to see what orientation shorts each and makes a beep, write these down so that way you'll know what to solder where.
To remove the stock joystick, you'll simply need to remove the 5 screws circled below: 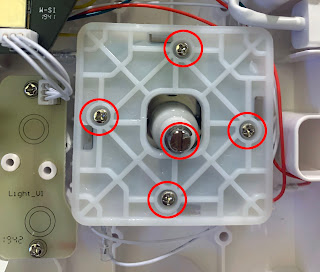 The new joystick is going to be agnostic to its orientation so long as you solder the wiring the same way you noted above. Rather than the pair of disconnects, you have two big solder joints on each corner of the PCB. You can test these with your multimeter with the wiring harness in to see which color is which direction. The return is common (all the pairs share the return connection). 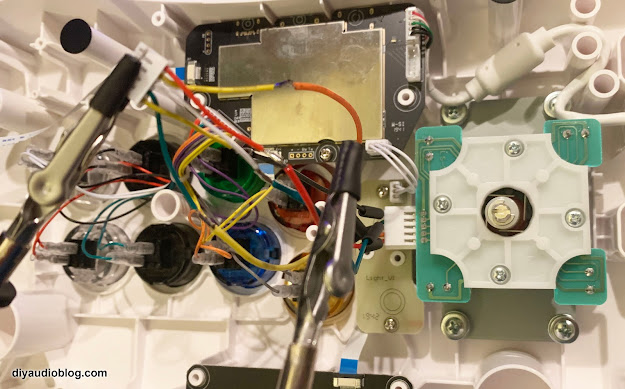 Each wire can be soldered now, you can use the color guide in this picture if your 5 pin harness is facing the buttons. One drawback is that the bottom of the joystick has a plastic tube that interferes with this placement, so you'll need to trim it off with a cutting wheel or your tool of choice. Each wire should be covered with some adhesive heatshrink tubing and then the bundle zip-tied together.
Note there are four black adhesive circles in the corners of the image below. They like to fall off while you are working, so make sure to put them back before reassembly. 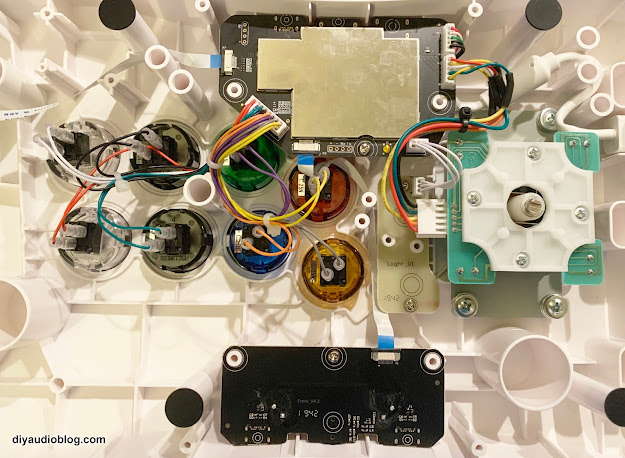 Once complete, you can screw the unit back together and replace the little plastic screw-hiders. Final photos coming soon.
Posted by HiGHFLYiN9 @ Zynsonix at 1:32 PM