Anyone who does DIY knows it can be expensive at times. As the dollar weakens and metal commodity prices rise, so do capacitors, resistors, transformers... you name it. There is a great way to get around that though, with surplus and buyout parts. There are many companies out there that procure these parts from discontinued products, company closures, old military stock and other sources and flip them at a discount. While you may need to modify your specs to accommodate some of these parts, they generally work perfectly well. Apex Jr. is one I frequent, and Partsexpress is also a great source for some unusual finds.

Partsexpress recently procured a buyout of Footnote electric guitar 5 watt amp assemblies and are passing them along for $15 a pop, a great deal given the complexity and quality of the unit. For $50-100, you can put together your own miniature guitar amp for practicing or small gigs. I decided to put one together as a gift for someone I knew would appreciate it, so I ordered the unit along with an A/C adapter, full range driver, grill and a few other items. Below is a list of parts with some embellishments that can be included as desired.

As you can see, nearly everything can be sourced from PartsExpress. Some other things that I had on hand that were needed were some 24 gauge wire, screws, solder, wood stain and seal, 2.5" hole saw, drill, etc.

The only modifications needed for the wine box were drilling the hole for the speaker, cutting the hole for the amp unit, and removing the little wood piece that would separate the two bottles of wine. I had a spare piece of mahogany that I used to reinforce the baffle area for the speaker. Drilling the parts in place like the handle and feet only takes a few minutes. There is a small amount of speaker caulk to seal the driver and amp within the box, the interior is covered with the automotive damping sheets, and the weather stripping helps seal the box around the perimeter.

The wiring to the driver connects directly to board via an adapter, but to add the LED pilot light I needed to solder some leads to the on/off switch so it would only turn on when the amp is on. The unit can also run on battery power, so I soldered another couple of leads to the board and ran them down to a 9V battery clip. As the amp creates a modest 5 watts, the battery should last a while. There was room in the box for the A/C adapter, but care was taken to ensure it would not short out or damage the board. After the photo below I added some additional wood to secure it in place. 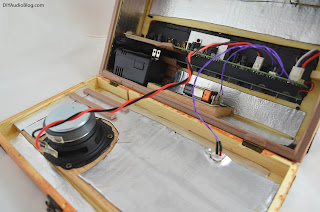 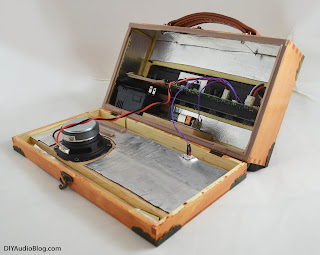 The SKB Footnote unit was actually made as a practice unit for guitarists that wanted to plug in a bunch of effects pedals, as it offers 8 separate power outputs for them. Per my research, the unit came with a 6" Eminence speaker, real-estate for all the pedals and cost around $300, so $15 is a bargain for the amp unit.

Even if you're just using the Footnote as a power supply it's worth the price of admission. The only trick is you'd have to build power cables to work with it as the kind it uses are hard to come by (9v center negative on both sides). PartsExpress does show you how to make one though.


Here's the unit in its finished glory. I used a woodburning pen to decorate the surface of the unit and personalize it. I applied the stain selectively to allow some of the objects to stand out a little bit. Should make a great gift! 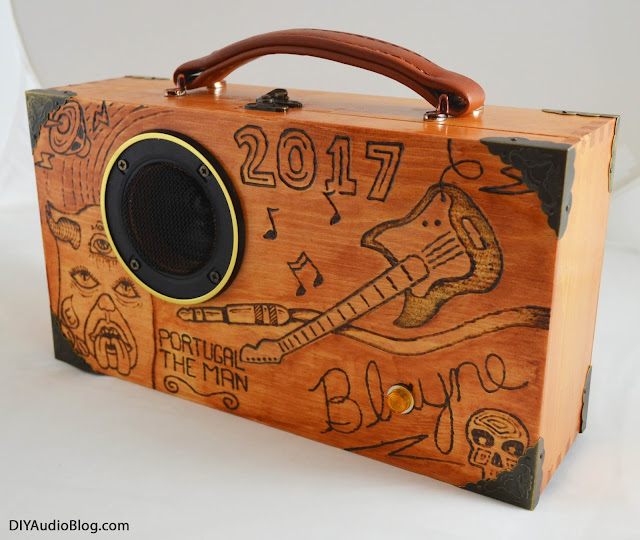 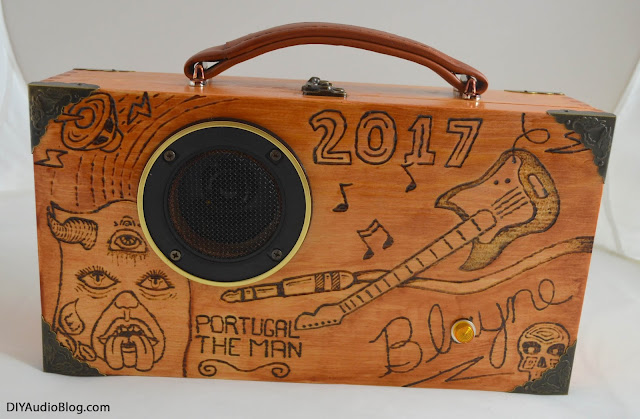