Op-amps, or operational amplifiers, are ubiquitous in solid state amplifiers. These little integrated chips are simple little building blocks designed to work in a wide range of electronics such as PCs and other devices. For those of you not familiar, op-amps are like vacuum tubes for the solid state world. Most manufacturers use sockets so the op-amps can be swapped, and each have a difference sound signature (e.g. warm, revealing, etc.). Some have voltage requirements that make them only compatible in certain designs, etc. Some are affordable (the LM4562 which runs less than $1), and some are expensive like the popular $25 Burr Brown OPA627.

Burson Audio is a company on a very short list of providers of discrete op-amps. Rather than having a bunch of teeny tiny components shoe-horned in a chip the size of a fingernail, Burson creates devices that plug into op-amp sockets that use a fully discrete set of diodes, resistors, etc. I remember my first purchase of several of their discrete op-amps  roughly six years ago, trying to breath some additional life into a Music Hall DAC. While their first iterations weren't super easy to install, they made a world of difference in the sound department. Everything was much more natural and effortless sounding than the stock op-amps which I believe were mid-grade models from Texas Instruments. 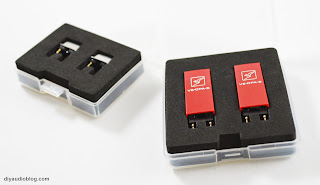 It's also a smaller form factor than the originals, which is crucial for installing in tight circuits / spaces. The V5i is a hybrid of sorts which includes both IC and discrete components, but is much smaller and should fit in virtually any build. Do note that these units can only replace op-amps as noted on the Burson site:

Installing them in a unit that is not compatible could cause undue stress on the components / oscillation, etc.