As mentioned in previous posts, much of the audiophile world has really moved from compact disc players to a computer-based digital audio setup, whether it's streaming over the local area network or coming directly from the output on your desktop or laptop. As we all know, the built-in digital audio converter in a computer generally leaves a lot to be desired for an audiophile. The sound card is generally an afterthought built into a computers motherboard with some of the lowest-cost chips available, likely doesn't have a very low noise floor and probably has gimmicky features like 3D sound processing. The best option is to bypass as much of this as possible, either through a dedicated optical output from a reputable sound card (something like the ESI Juli@), or to use a USB to coax converter (there are TONS of these on the market from companies like M2Tech, Musical Fidelity, Stello, etc.) and get that digital signal to a high quality external DAC.

An external DAC (digital analog converter) effectively converts a digital binary signal (think 1s and 0s) to an analog signal that you can send to your speaker or headphone amplifier. External DACs started to gain momentum in the late 80s when used with CD players with a digital output.


Now with computer audio, there are thousands of DAC offerings on the market. There are non-oversampling (NOS) DACs from makers such as MHDT and Valab, and oversampling DACs (also known as interpolating DACs) which use a pulse density conversion technique, from makers like Benchmark, Lavry and Audio Note Kits. Some feature tubes, some are solid state, some are warm sounding, some are bright or analytical. Really the best thing you can do when selecting a DAC is read a review from someone whose ears you trust (tends to enjoy gear that you enjoy) or preferably test one at an audio meet, as the source really is the cornerstone of your audio system and it's important to get one you really like. When a warm sound is preferred, often a tube DAC is the best answer; tube-based implementations tend to add harmonics and distortion to the sound that's very pleasant to the ear. Since this blog is all about DIY, I will be building a tube-based DAC kit.

The company Audio Note Kits has been offering tube-based kits online for nearly ten years now and has been around for much longer. The available number of kits is impressive; there are a number of push-pull amplifiers, single-ended amplifiers, DACs, pre-amplifiers, phono pre-amps and speakers. A rather interesting new product is the HiFiMan HE-6 headphone amplifier that runs on EL84s. As of this writing there were over 20 different kits available. The current DAC models are the L2.1, L3.1 and L4.1. Each model is offered in a few different flavors, the standard and signature versions, and there are a few options available balanced transformers and a USB converter. The different versions feature different tubes (6922 in the L2.1, 5687 in the L3.1 and L4.1), different transformer configurations and the parts quality is predictable higher in the more expensive L3.1 and L4.1.

In this post I will be assembling a DAC 2.1 Level B kit. The difference between level A and level B is simply the optional I/V transformers. These transformers handle the current to voltage conversion. These can improve sound quality in a digital system for three reasons, as stated by Sowter:


The starting block of any build is the chassis. Audio Note Kits had the intelligent idea to create a relatively universal chassis that could be used for many of their builds. Any holes that are unnecessary are covered up by the front and rear plate or are on the bottom where no one can see them. This "universal" chassis is a very thick gauge and is quite heavy, which is necessary to prevent bowing if it's holding a number of bulky transformers. The stock chassis comes in a nice textured black, with black front and rear panels (these appear to be plexiglass or lexan) and screened gold logos and text. I opted to have the chassis powdercoated gold to match the gold logos and make my unit a little different.


When the unit is powdercoated, it's necessary to leave the exposed metal areas for proper grounding and protect the screw holes so they are still usable after the process. These can be done by using screw hole inserts and stickers that are compatible with the powdercoating process. Below is an example of a chassis hole with exposed metal surrounding it after the gold powdercoat.

Concentrating on the chassis inputs and outputs, it was already decided that the chassis would use a balanced AES-EBU digital input in one of the D-flange holes. To make use of the other two D-Flange holes, I'll be using a pair of Neutrik recessed RCAs for the analog output of the DAC. The RCAs themselves would be replaced with the higher quality copper body Vampire RCA jacks (as seen in lower right).

Also used is a Vampire XLR-CF jack with gold plated copper alloy contacts for the AES / EBU digital input. Do note that the holes on the chassis need to be enlarged a bit for these items.


Next, the power switch and power inlet could be installed on the back panel of the chassis. I opted to upgrade to a Furutech IEC inlet FI-103(G) with built-in fuse holder which has some nice gold-plated copper alloy conductors. Included in the kit is some nice high quality silver plated copper in Teflon wire which is used for internal hookup from the. This wire is used to wire up the ground connections (which short to the chassis) and the power transformer. Also mounted during this process is the power choke which takes the place of a resistor to help smooth ripple in the power supply.


The printed circuit boards are thick and of good quality, which is useful if one ever decides to change / upgrade parts later on; there's nothing worse than desoldering parts on a cheap PCB and losing a solder eyelet in the process. It's also nice that the real estate given for coupling capacitors is very ample, so the builder can easily fit some big paper-in-oil caps if they'd like. Also note the little holes in the board near the capacitor area so they can be secured with zip ties. Zip ties are not included with the kit but are readily available from hardware stores or places like Partsexpress.


The DAC 2.1 is offered with Mundorf Supreme film capacitors but you can request the Audio Note Tin caps for the line board. Below are the Audio Note tin caps shown next to a nickel for scale. These are not small by any means, but typically sized for oil caps. These are not paper in oil but make use of mylar film and are assembled by Audio Note UK.

I decided to begin the build by populating the boards. Brian Smith of Audio Note Kits was able to offer me some nice Takman carbon film resistors for the line board. You'll also notice the AN tin caps and Elna Silmic II electrolytic capacitors. Interestingly, the ceramic tube sockets here are the chassis mounted type which are mounted on aluminum standoffs. The reason for this is so wires can be soldered to eyelets at the bottom of the socket to power the heaters on the tubes.

Next the M2 power board would be populated. I dropped a few parts that I had in storage in these, including Kiwame resistors which are rated to 2 watts and typically measure very close to the printed value. Also added were Elna Silmic and Nichicon Fine Gold capacitors.

Once the boards are completely populated, it's a good idea to clean off the solder flux. My favorite way to do this is to splash some isopropyl alcohol on a cheap toothbrush, in this case a Snoopy themed kids toothbrush (they're like a dollar for a four pack) and scrub away on the bottom of the board, then dab with a paper towel to remove the flux. After doing this 2-3 times the board is suitably clean.

Once the boards are clean, they are wired up to the unit. As the M2 Power Board has quite a few wires connected to the bottom of the PCB, fly leads are all soldered in place before the standoffs are secured to the chassis.

Below is the top-down view of the unit after the fly-leads from the power board were soldered to the transformer.

Once the M2 Power Board is secured, the line board can be wired up. As shown in photos of the internals of the unit, heatshrink was placed on the leads travelling to the line board for a more uncluttered look.


Next up is the line transformers and DAC portion. 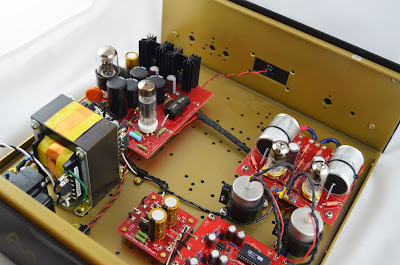 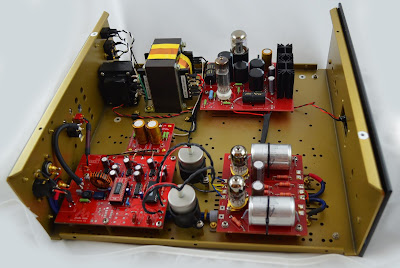 And the finished product from the outside: 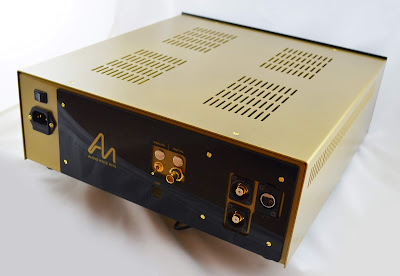 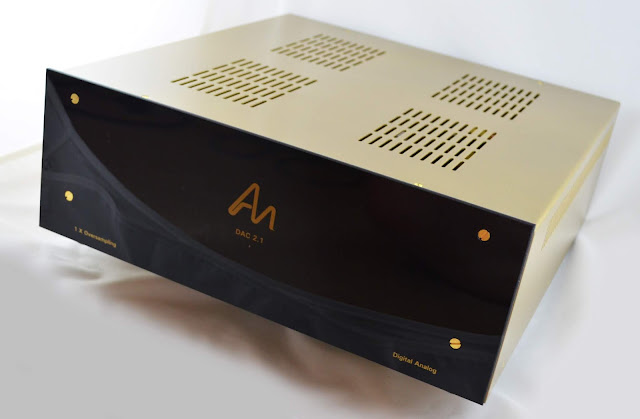