Audiophiles can be very finicky about their power source. There are countless products available for music listeners to replace their receptacles, power cords, line conditioning and even the faceplate with audio-branded merchandise. Companies like PS Audio, Furutech, Oyaide, Wattgate, Neotech and Onix (just to name a few) all have extensive power-related products made specifically for audio enthusiasts. There are other companies that offer well-made products for a variety of consumers and are still very worthwhile for the discerning audio listener who isn't interested in paying the high prices of audio-niche gear. These companies include Marinco Industrial Group, Hubbell and Schurter.

In this post, I'll be putting together a custom audiophile power strip from a variety of low-cost but high quality components. Please note that this post is for entertainment purposes only, attempting to replicate anything shown here has the potential to be a fire or electrical hazard. I've selected a Hubbell 20A 4-Plex Box in a nice dark-brown color to mount to a generic 2 gang steel box to be the base of this "audiophile" power strip. Some other parts I'll be using are 5 rolls of Teflon tape, a Marinco 8215 hospital-spec 3 prong plug, a run of military-spec 10 gauge silver-plated copper in Teflon wire, some tinned copper braided shielding, a small amount of bus wire and some sleeving and heatshrink.

Oddly enough, it's not too often that you find silver-plated copper or Teflon in power products marketed to audiophiles. PS Audio had a very substantial power cord called the Premier SC that was released in 2006 with silver in it, but it was quickly discontinued (possibly due to people not biting on the $999 SRP). Also, many audio power cords come with cheap high-loss poly vinyl chloride (PVC) dielectric, as one moves up the line, the quality of the copper gets better, but the dielectric remains the same. Nordost actually pays quite a bit of attention to the quality of their dielectric, but it's not terribly common with other companies; you're lucky if they even tell you in the specifications. One would think if these companies agree that the difference in power cords is audible, and I hope they would considering how much some of them cost, that they would consider the quality of the dielectric a little bit more.

This cord starts off nearly identically to my Right Angle Power Cord, so I won't be covering those initial steps in this post. There is basically the twisting of the geometry of the three 10 gauge wires, wrapping with several layers of Teflon, covering with a full-coverage braided copper shield, soldering a bus wire to it, then wrapping with several more layers of Teflon. It's a very time-consuming process, but nice to do while listening to some music. Below you will see the power cord after all these steps are complete.


Once all these parts are ready, it's nice to dress the cable with some techflex. I chose to use one layer of red and two layers of black on top to give it a dark brown look and match with the other parts to some extent.


Once the dressing process was complete and heatshrink was applied, it was time to attach the Marinco 8215 plug. The silver plated wire was stripped and the bus wire that's conductively attached to the shield is wrapped around the bottom of the ground wire and soldered in place. This allows the braided shield to act as a floating shield (it's not connected at the other end) and protect from EMI / RFI.


The Marinco plug is installed completely by screwdriver. Pressure allows the contacts to work without soldering. I personally prefer soldering, but soldering terminals are fairly uncommon with these DIY type electrical plugs. If these conductors were pure copper, I would tin them with solder before installing them in the plug to prevent oxidation. The strain relief system is tightened with screwdriver and the plug is ready for use. Before the Hubbell 4 Plex sockets are installed, a small strain relief collar is installed on the two gang box and I used some epoxy to hold it in place, fed the cable through it, installed a clamp and added additional epoxy around the clamp to ensure this cable wasn't going anywhere. The wires were then stripped and screwed down to the corresponding screws on the Hubbell 4 Plex.


I was going to use some vinyl dye on the blue collar, but I kinda like it as an unusual accent, it's about the same color blue as the Zynsonix heatshrink. Now that these conductors were fastened on, the 4 plex outlets needed to be screwed down and the unit tested.


Hardware stores have a very handy outlet tester that gives you a three LED readout to let you know if everything is wired correctly. The two LEDs above indicate that the outlet is in working order. Below is the finished unit ready to feed a hungry amp ;) 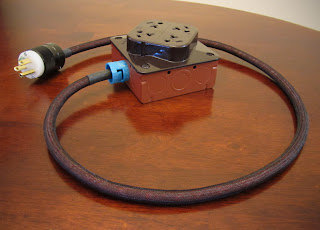 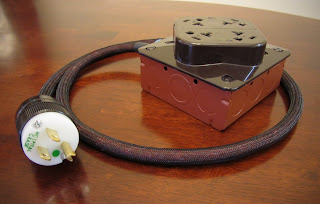 The Fine Print:
The above steps detailing the creation of a power cord are for entertainment purposes only, and not to be performed under any circumstances. Please remember that attempting to use homemade power cords can be dangerous to you and/or your surroundings. The owner of this blog and all associated parties can not / will not be held responsible if you attempt the process posted above and cause physical harm to yourself or your surroundings. Many electronics contain high voltages that can kill, and DIY power cables can be a fire hazard. Please keep this in mind.