Version 2 of AMB's σ11 (Sigma 11) regulated power supply has been out since June of 2015, but I'm finally getting around to building my own. AMB (Ti Kan) is mostly known for his headphone amp and DAC designs, but his site offers several power supply options as well.

The σ11 is a top notch DIY single-rail linear regulated power supply known for low-noise, high-current, excellent line/load regulation, wide-bandwidth, and stability. The circuit features all discrete components and high-current MOSFETs for the output. Per AMB, the σ11 is a great choice for DIY headphone amplifiers, pre-amps, DACs, network media players, and other devices needing a single-rail regulated power supply.

This power supply is a pretty quick build with ~40-50 total parts. A typical builder can populate the PCB in an hour or two. AMB offers the PCBs for sale on his site, along with some of the necessary parts. The rest you'll need to get from Mouser / Digikey or your favorite parts supplier. I went with all stock parts aside from an Antek 50VA toroid instead of the Amveco TE62062 25VA as it was much more reasonably priced, albeit a little larger. Because of this, the Hammond 1455N2201 was the best chassis size for the job.

Rather than leave the Hammond case plain, I wanted to give it a little more character. I sourced a piece of wood online which didn't have a species listed, it simply was called Asian burlwood. I cut a front plate with about a 1/2" overhang in each dimension and drilled holes for the screws to line up with the existing screw holes in the Hammond case. Two coats of satin lacquer gave it a nice sheen.

Two holes were cut into the top of the Hammond case and it was sanded down with 180 grit sandpaper to reveal a grain-like anodization pattern. Powercoated aluminum grating was secured with adhesive underneath the holes... then a permanent furniture market was used to give the bare aluminum a bronze-like color.

In the rear, I've installed a pair of outputs. The board offers up to four outputs if desired, but an appropriately sized toroid should also be used. If you're not sure about the rating needed, the forum on the AMB website can be very helpful as other people have likely already asked the questions you are wondering.

A Fender-style pilot light was installed up front with an Amber jewel and LED.


All done! Now I have a nice regulated 24v power supply now with a pair of outputs.


Please remember that building/modifying circuits can be dangerous to you and/or your surroundings and should only be performed by a certified technician. The owner of this blog and all associated parties can not / will not be held responsible if you attempt a build or modification posted above and cause physical harm to yourself or your surroundings. Many electronics contain high voltages that can kill, and mods, if performed improperly, can be a fire hazard.

MHDT has a cult following in the DAC world, and for good reason. They may not all be featuring the latest chip designs and 768kHz inputs, but new technology doesn't always have a direct correlation with better sound. Case-in-point, the prices of 1960s equipment made by H.H. Scott, Harmon Kardon, Marantz and McIntosh all continue to increase from more and more audio enthusiasts desiring the musical qualities inherent from the Golden-era of audio. Granted if you are a purist and want a straight line response curve, these won't scratch that itch, but if you crave a warm musicality MHDT has few peers that can rival.

The Atlantis is one of the latest offerings from MHDT, and much like last generation's Havana, along with the current generation's Stockholm, features a R/2R Multibit DAC. The Stockholm, Atlantis and Pagoda are unique as they have discrete transistors in the I/V stage, no opamps at all. Opamps are often looked down upon as they can be a "one-size-fits-all" type of solution, and the tasks they perform can generally be done better with discrete components. The Atlantis features a AD1862-J DAC chip, and uses a tube-buffered output stage (GE5670).

It's been fun to see the progression of MHDT DACs over the years. The chassis used to be made completely out of acrylic. Now only the front cover is acrylic (a nice thick acrylic) and the rest of the body is make of aluminum panels that screw together. In addition, the op-amps are going away and there is more utilization of surface mount components on the PCB. The circuit boards have also become more robust, which is nice when exchanging components. Other components generally stay about the same, from Nichicon Fine Gold electrolytic caps in the power supply, Nichicon Muse caps and Sanyo/Panasonic OS-CON caps elsewhere, as well as MHDT brand film caps which I imagine are sourced in Taiwan.

I generally like to replace the Muse caps with Elna Silmic II for a little more warmth, as well as Soniccraft 600v 0.1uf and 0.22uf Sonicaps for the smaller film caps, as Sonicaps are a great value and are small in form factor compared to most other audio capacitors. For the output caps, replacing with the best quality that fits that you can afford is generally the best strategy, as they are directly in the signal path.

MHDT includes a larger toroid in the Stockholm, so I wanted to upgrade the power supply in the Atlantis. I checked Mouser and Digikey for a larger toroid and no one seems to make a unit with the two secondaries needed, so you'd either have to have two toroids (which wouldn't fit in the case) or snag one from MHDT directly. The larger unit from the Stockholm fits perfectly well in the Atlantis, you don't even have to drill a new hole to mount it. While they look similar in size, the larger one is twice the volt-ampere rating.

The RCAs on the unit are perfectly fine, but I was able to source some nice ones with teflon insulation, so I installed those. The unit on the left is the teflon insulated one, it looks a little bit different but fits perfectly.


The RCA for the digital coax was replaced with a Vampire BNC (about $13-14). I chose Jupiter HT paper in wax caps for the output. They've served me well in other applications and have a nice natural presentation. I happened to have several Kiwame resistors that I ordered from Partsconnexion. 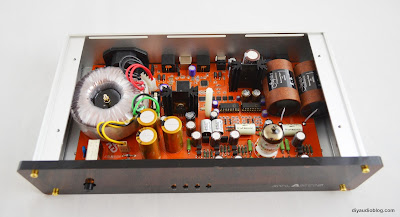 The Jupiter 2.2uF 600V caps had to be shoehorned to fit. While they fit fine in the Havana (albeit tightly), the Atlantis opening was a little narrower despite the slightly larger chassis footprint. Reviewing my options, I decided to stand the caps off the board slightly to clear the small Oscons and sand down the heatsink to allow the capacitor to wedge up next to it. It doesn't get terribly hot, so we'll see how that goes.

While I don't go out of my way to get audio fuses (I'd be pretty grumpy if a $70 fuse broke, and I'm a little skeptical as the resistance in a fuse is minimal), PCX had a few on sale for $12 from HiFiTuning so I figured I'd give it a shot. $12 is a drop in the bucket for audio gear as you know. Swapping the 400ma stock fuse with the gold fuse seemed to increase the higher frequencies (by a small degree), so it may be counteractive when you're after a warm-sounding DAC. I'll be testing more, but that's my initial finding. I may try in some other equipment to see if that's consistent if they're still cheap for my next order ;).


The DAC sounds excellent. More resolving and clear than my Paradisea and less forward than my Havana. It's my favorite sounding MHDT so far and very easy to listen to. I hear the Stockholm is even better (based on forum banter around the web), but this is a DAC for a few bucks less.

UPDATE: I found some 30mm aluminum feet with a damping ring on Aliexpress that are a nice step up from the stock plastic feet. They're  quick and easy replacement and are less than $10 for a set of 4. 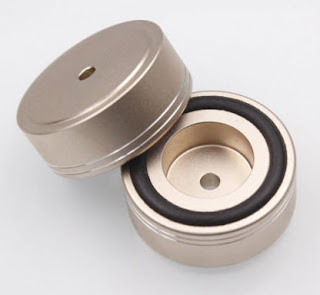 The Fine Print:
Please remember that modifications can be dangerous to you and/or your surroundings and should only be performed by a certified technician. The owner of this blog and all associated parties can not / will not be held responsible if you attempt a posted modification and cause physical harm to yourself or your surroundings. Many electronics contain high voltages that can kill, and mods, if performed improperly, can be a fire hazard.

I was browsing around the net looking for a quick and fun little project when I discovered Fred's Amplifiers. Fred has a small site with a number of PCBs and kits, most of which are portable headphone amplifiers, along with a portable guitar amp kit and a couple of crossfeed units.

I decided to order the 12AU7 Valve headphone amp PCB. It's a single sided PCB and was only $10, with the BoM (bill of materials) posted on the site. I went with the PCB versus the kit as I have tons of parts lying about, but the kit is only $45 if you want to go that route, just note you need to buy the chassis (Hammond 1593) and A/C adapter (12v 1A Regulated DC supply, center pin positive) on your own. The unit only requires around 25 parts to complete, so you'll be done in no time. The Op-amp in the kit is the venerable JRC 4556 used in most CMOYs / RA1 clones and similar portable low-power headphone amps.

I went with the translucent blue version of the Hammond case (1593KTBU). Trimming into the plastic Hammond case requires you to go slowly on the drill press or the plastic will crack. You may want to buy two cases (they're $4 each) just in case your holes don't line up perfectly. 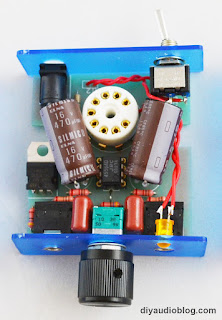 My unit features Takman carbon film resistors, a diffused 5mm amber LED, a milled aluminum knob from Kilo, and 470uf 16v Elna Silmic II capacitors. Elna Silmic II are widely accepted as the best electrolytic available for the signal path. They are a tough fit, and will require you melt down the PCB standoffs on the bottom of the Hammond case to get everything to fit nicely. You could also drill holes at the top of the chassis for clearance, but that reduces the portability in my opinion. The AC adapter I went with was a $10 Meanwell unit - SGA12U12-P1J. I'm sure there are cheaper, I just plugged the specs into Mouser and bought the first one on the list.

Here are a few more photos of the amp: 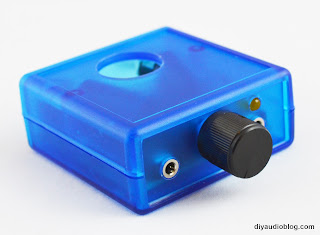 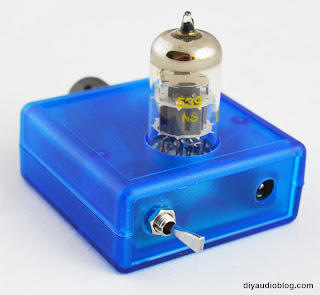 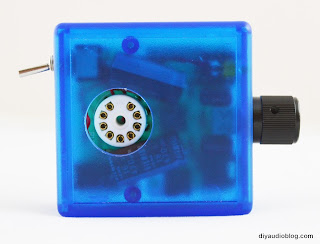 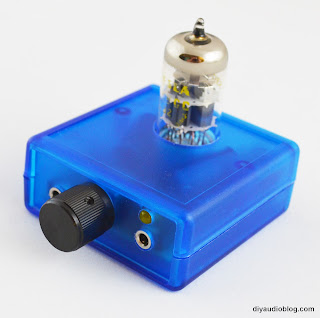 There's nothing challenging or unusual about this build, so if you'd like a fun and affordable little portable tube headphone amp, put this one on your short list.