The SupaBoy SFC is one strange customer. We’ve seen a number of DIYers hack desktop videogame consoles to work on the go, but it’s typically for the novelty or the challenge. Hyperkin’s SupaBoy takes the familiar brightly colored Super Nintendo controller and adds about a pound of extras, including a 4.3” LCD screen, speakers, two controller ports, a cartridge slot, rechargeable battery and a variety of buttons. The additions aren’t quite svelte or seamless as the ergonomics are a little awkward, but it does have the look of a finished product.

The SupaBoy plays as the Pied Piper, whistling sweet tunes to nostalgic gamers (probably in their late 20s to early 40s) who still hold a place in their heart for the Super Nintendo and have held on to a few cartridges. Drawing you in are the insanely low price ($65 at various retailers as of this writing) and the promise of simple access to your SNES library without having to pull your console out of the closet and fiddle with the connectors. 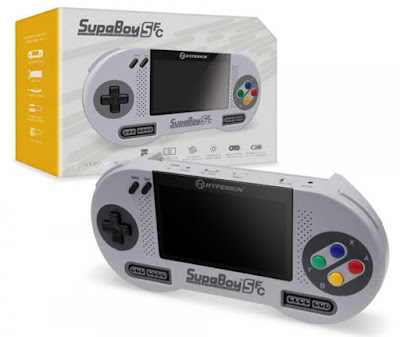 Once you get the console in your hands, the first oddity is the cartridge sticking up above the unit when seated, quite unusual if you are used to the flush fitting Gameboy cartridges. Wrapping your hands around the console gives you an idea of its girth. It’s slightly unnatural feeling, but you can get used to it. Some may be bothered by the weight, but at just under a pound it’s not bad.

There’s a lot to like: the screen is nice and colorful, you can adjust the brightness, there’s a 4:3 mode, the battery is rechargeable and user-replaceable, it charges off of a standard 5V USB cable, the controls feel solid, the cartridge slot has a flip up dust protector, and there’s a headphone output. I was also surprised that given this is a hardware emulator, it was compatible with every game I tried.
One of the items that falls into the could-be-better territory includes the cartridge seating. I found I had to seat and reseat a number of cartridges to get them to start. Another bugger is the quality control. The first unit I received had a fingerprint smudge behind the screen. The second had a little bit of dust, which I can live with. Given those obvious flaws, there may be other issues lying inside, but I have not cracked the unit open to assess. On several reviews, I noticed some users suffered from having their saves deleted by the console. 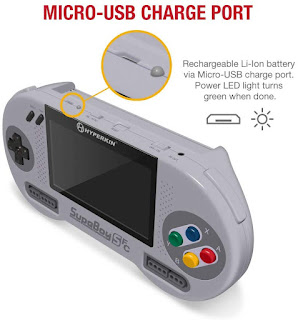 Compared to a similar offering that plays 8-bit Nintendo games, the 8-Bit Boy, the SupaBoy SFC doesn’t have the same quality feel and screen crispness. The 8-Bit Boy runs $99, and includes a pair of controllers and AC Adapter, while the SupaBoy does not, so it’s a relatively fair comparison.
I think what Hyperkin could learn from the U.S. Market is that video game enthusiasts in the ~20-40 age bracket would likely spare more than $65 for a better product… or at least a little more for better QC. Given the popularity of the $185 AVS system, the $189 Analogue Super Nt / Sega Sg, and the upcoming Polymega, there’s a market for more premium gear that plays vintage games.

Ultimately, the SupaBoy SFC is a good product that makes sense to use in the house or take with you to a friend’s house with a couple of games but is a bit to large for most people to use portably. Due to the saving issues and limitations of emulation, it’s probably not a complete replacement for a SNES console for most people. At least for $65 it’s a great novelty and will let you hop into some of your favorite old games without much fuss.
Posted by HiGHFLYiN9 @ Zynsonix at 5:46 PM No comments: