Wayne Colburn of PASS Labs was kind enough to release a new DIY headphone amp circuit into the wild, the WHAMMY, standing for Wayne' Headphone Amplifier Must Make Yourself. It's a nice simple build, no need to match parts or make adjustments, so it's perfect for the budding DIY builder. It's also inexpensive. The PCB, parts and chassis should be under $200 without much effort. Jim Tiemann aka 6L6 of DIYAudio has been kind enough to coordinate the project and has been instrumental in making it accessible. Having a headphone amp of this caliber available at this price is an incredible opportunity and I hope many can take advantage of it. If you're not familiar, Pass Labs is very

You can read more about the project here and boards can be purchased for a very reasonable price at DIYAudio. And you can learn more about the circuit design by watching this Youtube video:

I'll be briefly walking through my own build. I encourage you to also check out Jim Tiemann's build as it is more granular. My parts choices are also going to be outside of the standard BOM to some extent and will be more expensive, but DIY is fun because you have the freedom to make some unique choices without deviating from the original circuit.

As I knew I would have a little bit of extra headroom in the chassis I'd be using, so I added a piece of Dynamat between the board and the transformer just for a little bit of extra vibration damping. There's electrical tape over some of the larger contacts to prevent any shorting with the aluminum on top of the Dynamat.

After this, the power supply components were populated on the board. Normally, you would populate the small components all across the board such as the diodes, resistors, etc., however in this case populating the power components first allows you to test the power supply and ensure it is running properly and within tolerance before moving on. Review Jim's write-up for additional information on the measurements.

After the power supply is tested, fully disconnected, and the caps allowed to fully discharge, I moved along to populate the smallest parts first. If you've read my blog in the past, you'd know I really like Kiwame/Koa Speers resistors. These can be found at Mouser under SPR2 and are 40 to 50 cents each, rated at 2 watts which is far above what's actually needed. Not all values are there, so you can get the remainder at a boutique provider like PartsConnexion or just get some Vishay Dales at Mouser.

Then the rest of the parts are added. While Wayne mentioned that the Silmic IIs, which are now being produced in China, aren't as reliable as they used to be, I still like the sound of them so I went ahead and used them. They're over-rated too @ 50V, so hopefully they'll last a while. You'll notice they're a bit large, so some creative mounting is needed. Wayne suggested using Nichicon BPs (bi-polar caps, they're iridescent green) if you'd rather not use Silmics. C1 and C5 are the input coupling caps and should be of high quality as they're directly in the signal path. I personally used some vintage Sprague paper-in-oils, but you can likely fit some of the smaller narrow Mundorf EVO caps or Clarity Caps, either of which can be found at PartsConnexion. The lead spacing is roughly an inch.

I hate this picture as it looks terrible from all the flux (this is before I cleaned it with some isopropyl alcohol and a toothbrush), but It shows where the film bypass caps are. The units in the audio section are polypropylene and the units in the power supply are polyester. The twisted pair is pulling off the 22V secondary for a pilot light.

The chassis I selected is from IAG DIY Tube Audio Products. He lists his chassis on ebay and on his website. Hand-made in the USA and built like a tank. It would be a slightly tight fit so I needed to see where items would be mounted to the front and back of the chassis so they wouldn't bump into any parts on the inside. The IEC filter in particular needed to be offset from the center so it didn't bump into the PCB mounted transformer. I decided to mount the 0.5A fuse and socket on a blank part of the PCB so there'd be one less hole drilled in the chassis.

Once everything was lined up and the holes cut, the PCB was secured in the enclosure using 1/2" standoffs. The front panel has a four pin connector in addition to a locking Neutrik TRS as most of my headphones are wired that way, so it saves me from having to use an adapter.

Wiring is scraps of Cardas I had in my wire bin, 4x24, 2x24 and 2x21 and some 24AWG, all litz in teflon. The potentiometer is the $40 100K Audionote with solder tags. It's nice and small so I didn't have to worry about it bumping into a discrete opamp. The IEC filter is from Furutech, gold plated. I normally wouldn't spend the money on it but it was discontinued and quite a bargain. RCAs are Cardas rhodium plated. The switch is a simple 3A rated toggle I picked up from Radioshack when they were clearancing everything. The LED pilot light is one from a guitar shop typically used for an effects pedal. Everything else is from the BOM.

Here's a few more images of the chassis with the wood panels.

I used a very simple circuit from ClassicValve for the LED. 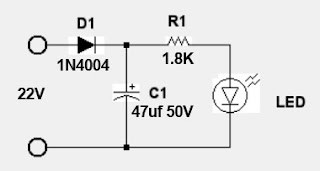 Here's an image with the bottom panel and feet installed.

...and here's the WHAMMY almost done, just missing the knob.

It's quick and easy to swap the op-amp on the unit to slightly alter the sound. Dropping in a Burson Supreme Sound V5 soundeda bit less constricted than the Texas Instruments op-amp that's in the BOM. The difference was less pronounced than if you use a Burson in a DAC, but still an improvement and worth the price of admission (you only need one). I found the V5i picked up a little more noise in this particular amp, so stick with the V5 if you get one. I also swapped in and out the optional capacitors just in case they improved the sound with the Bursons, but wasn't able to hear any difference in any of the configurations. 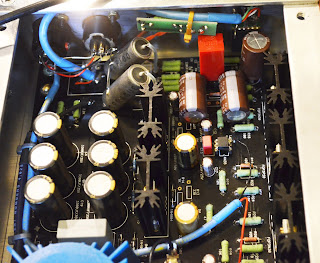