I’m going to guess that the Crack is Bottlehead’s all time most popular kit. A great little tube headphone amplifier at a price-point nearly anyone can afford that sounds very good for the money, it’s really hard to go wrong here. The Crack has gone up in price a little bit since its introduction 3+ years ago, but it’s still quite a value. I also highly recommend the Speedball upgrade, which replaces the plate loads on the tubes with a constant current source and brings this amp into its own with added detail and transparency. I built a Crack shortly after its release and of course replaced a number of the parts with racier versions and it sounded quite good. Years later, I reminisced how much fun it was to put together that point-to-point Crack and decided to build a new one from the ground up with fancy parts and give it a layout that would accept that added girth.

While I normally would have turned to Keith Kirby to shape me up a new chassis, it was time for me to step up and build my own, despite not being crazy about working with wood. The first task was to figure out what the size of the top plate would be with the additional room for larger capacitors (in both coupling and power supply positions) and a pair of large-ish Hammond chokes for the power supply as well. This ended up being 12” x 12” (more than twice the stock 10x6 size!), which is perfect as sheets of metal can be ordered in 12” x 12”. Rather than go with the typical aluminum plate, I spent a few extra bucks and went with a 12” x 12” x 0.1” copper plate. The copper provides even better grounding and conduction than aluminum and comes with a nice natural color. Despite the fluctuating metal market, a copper plate this size isn't too bad at about $40.

The next chassis-related task was to create the wooden box that the plate would sit on top of. This is not the most trivial of tasks for those of us not blessed with nice power tools and a garage. So, I drew up the dimensions of the plate, where the plate would sit on top of the routed edges on the wood, noted how deep the route would be, and based on that drawing I found the appropriate sizes for the wood to be cut and added about a 1/16” of an inch for wiggle room. For the wood itself, I decided I wanted something a little more intricate (“fussy”, as someone I know would call it) than flat sides, so I went with a flat piece of pine and a piece of decorative molding and glued the two together. I then used the router to make a decorative route along the outer top edge and used a rabbeting bit to make the inner route that the plate would sit on. Four sections of this piece could then be cut at 45 degree angles to make the box. Since I was cutting the wood by hand, I used a plastic miter box and did my best to cut at a straight 45 degrees all the way down to get the corners to line up properly. Obviously, this never works out perfectly, so that’s what wood filler is for.

Once the box was assembled with wood glue and the wood filler sanded down smoothly, four small wood blocks were glued to the bottom corners to provide adequate surface area for the EAR damping feet to be placed. For the finish, rather than simply staining the wood like I normally would, I opted to use a copper leafing kit from Old World Art to bring the copper theme into the base. The leafing kit is a multi-step process including a red base coat, adhesive size layer, application and burnishing of the metal leaf, a sealer coat, application of an antique top-coat, and then another sealer coat. The nice thing about copper leaf is it's incredibly cheap; a set of 25 sheets runs less than $10.

Once complete, it looks like the texture you would find on an old frame on a painting in an art gallery.

Now the copper plate could be cut, punched, drilled, Dremeled, etc. to hold all the parts in place. The layout used to plan the initial plate size was used to determine where each hole would fall. Small holes were drilled using the drill press, larger holes for tubes and the Neutrik locking plug were punched using GreenLee punches, the extra-large holes for the capacitors were cut using hole saws on the drill press, and square holes, like for the transformer and IEC inlet were cut using a Dremel metal cutting disc. The copper is a little denser than aluminum and requires a bit more effort to cut through.

Once the chassis plate had all the holes necessary to accommodate the parts for the build, it was sanded down, starting with 80 grit sandpaper and ending with 600 grit. Next, a coat of clear satin finish was sprayed on each side to protect the copper, otherwise it tends to pick up fingerprints and oxidize. Gloves needed to be used after the sanding process so my fingers wouldn’t leave any oil on the copper. Once the clear coat was dry, parts could finally be fastened onto the plate.

Aside from the PT-3 transformer from Bottlehead, a little bit of the wiring, and the Speedball upgrade, all other parts were swapped. For the wiring, silver plated copper in PTFE/Teflon was used for power connections, including the heaters, Cardas 20.5g internally litzed copper in Teflon for the signal, and Kimber 19 gauge copper in Teflon for capacitor connections, etc. Shielded Cardas copper in Teflon was used for the input and output wiring with the copper mesh shield grounded. A few of the nice gold plated solder posts from VT4C were used in place of the tin plated ones, and short turret boards were used to handle the power supply connections, which I find a little more robust for multiple connections. The tube sockets were Teflon with gold plated copper contacts and matching miniature PCBs. Coupling caps were a combination of a 47uF Obbligato Gold Premiums and 70uF Obbligato Film in Oils, both good values for the money. The final power supply capacitor was replaced with a set of three 75uF Axon caps wired in parallel (simply because the three together were a bit cheaper than a single 220uF film cap). The volume control was a relatively low-cost Taiwanese ladder stepped attenuator. Resistors were all of the Kiwame / Koa Speers carbon film 2 watt variety. The knob was a solid aluminum one with set screw from Kilo. Finally, the switch was a nice little brass plated 3A DPDT that was made for guitars.

Wiring up the unit went just like a stock unit aside for a few things. The Hammond 159M chokes (measuring 254 ohms resistance) replaced the 270 ohm resistors, the Obbligato Gold and Film Oil caps were wired in parallel and soldered in place of the coupling electrolytics, the pilot light was wired up to the 6.3V heater , and a few of the ground connections were moved about.  Also is the 6SN7 driver tube. A big thanks to Grainger who posted the alternate wiring information at Bottlehead which is duplicated below:

Even though the stock Bottlehead PT-3 looks great as-is, I wanted to try something a little different for this build, so I opted to use a transformer cover from VT4C. The transformer cover base had to be trimmed to fit the PT-3, but it's a perfect fit length and width wise.

As mentioned earlier, the Speedball is a constant current source upgrade that replaces the plate loads of the input and power tubes. I also took the time to wire up the big 70uF oil filled Obbligato film caps. 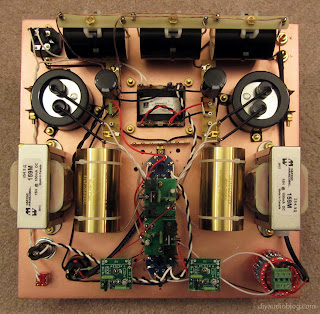 Here's a shot of the completed amplifier sitting on the copper leafed base. I really love the look of the copper color and black on this build.