Our good friend Shannon Parks over at DIYTube has designed another great tube-based amplifier, this one using a pair of EL84 power tubes and a single 12AX7 driver tube.The Budgie has been designed from the ground up to be an affordable build, the power and output transformers (sourced from Edcor) run a measly ~$100 or so dollars for all three! Throw in the parts ($35), tubes ($35), PCB ($39), and build your own chassis ($20), and you should be able to scrape by under $250. Granted, this would be a bare bones build, but it just goes to show you that this is an affordable design. You can go hog wild and add Shannon's top custom printed top plate and a Hammond chassis with walnut sides, and maybe some boutique coupling capacitors, and we're still looking at a reasonable price tag for a single ended tube amplifier.


I chose to skip the top plate as I enjoy building my own chassis (it prolongs the whole building process which I find inherently enjoyable anyway). I had a scrap piece of copper which I trimmed to 7" x 12", which is a little larger than the custom printed PCB and will allow a little more air between the components. The base would be an intricate mitered wood frame made from chair rail molding from the hardware store.

The copper plate was cut, punched, drilled, Dremeled, etc. to hold all the parts in place. The layout used to plan the initial plate size was used to determine where each hole would fall. Small holes were drilled using the drill press, larger holes for tubes and the Neutrik locking plug were punched using GreenLee punches, the extra-large holes for the capacitors were cut using hole saws on the drill press, and square holes, like for the transformer and IEC inlet were cut using a Dremel metal cutting disc. The copper is a little denser than aluminum and requires a bit more effort to cut through.

Once the chassis plate had all the holes necessary to accommodate the parts for the build, it was sanded down, starting with 80 grit sandpaper and ending with 600 grit. Next, a coat of clear satin finish was sprayed on each side to protect the copper, otherwise it tends to pick up fingerprints and oxidize. I've had good luck with the clear satin enamel from Krylon. I tried the Valspar outdoor clear satin and it clouded up and flaked off, so I won't be using that again. Gloves needed to be used after the sanding process so my fingers wouldn’t leave any oil on the copper. Once the clear coat was dry, parts could finally be fastened onto the plate.


First the various connectors and jacks could be installed. The RCA females are nice quality Philmore gold plated units with a Teflon dielectric. The binding posts are generic heavy duty gold plated brass with clear plastic on top, made to look like WBT's early binding posts I assume. Also installed is the ubiquitous Neutrik 1/4" TRS locking jack, which I elected to install with the release up front for ease of use, the IEC inlet with built in fuse, and a small toggle switch for power.


Populating the PCB were a number of parts I had lying in the parts bin, some Koa Speers resistors (green) from Mouser, and some spiffy Elna RFS Silmic II electrolytic capacitors from Digikey. Both the Koa Speers and Elna Silmics are considered to be "warm" sounding parts (the opposite of bright or harsh), which is usually what I'm going for. The big blue caps are 150uF Cornell Dubiliers that have good ripple current ratings, which will help smooth the power supply a bit in addition to the Triad choke called for in the design. In addition, I added some surplus Nichicon 0.1uF film caps bypassing the power caps, which would help ripple to some minor degree as well. I also found some oddly shaped Mundorf EVO Aluminum 1uF film caps that I installed on the side of the board. These were relatively low cost and a bit more interesting to look at than a standard film cap.

The PCB could now be fastened to the copper plate with short aluminum standoffs. 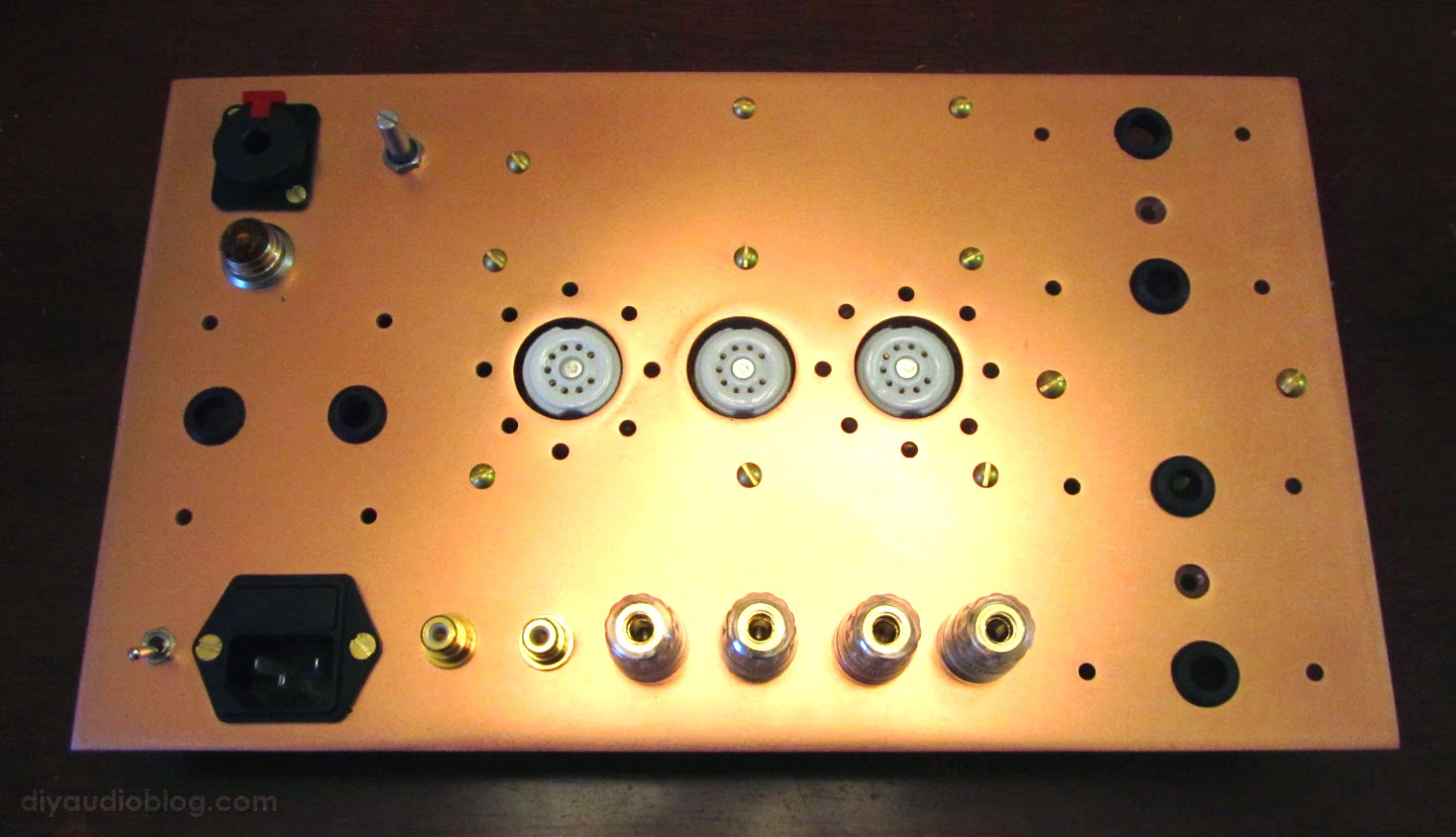 Directly beside it would sit the 1H Triad choke which I pulled from an ST70 when I upgraded that choke to Classic Valve's heavier duty model. 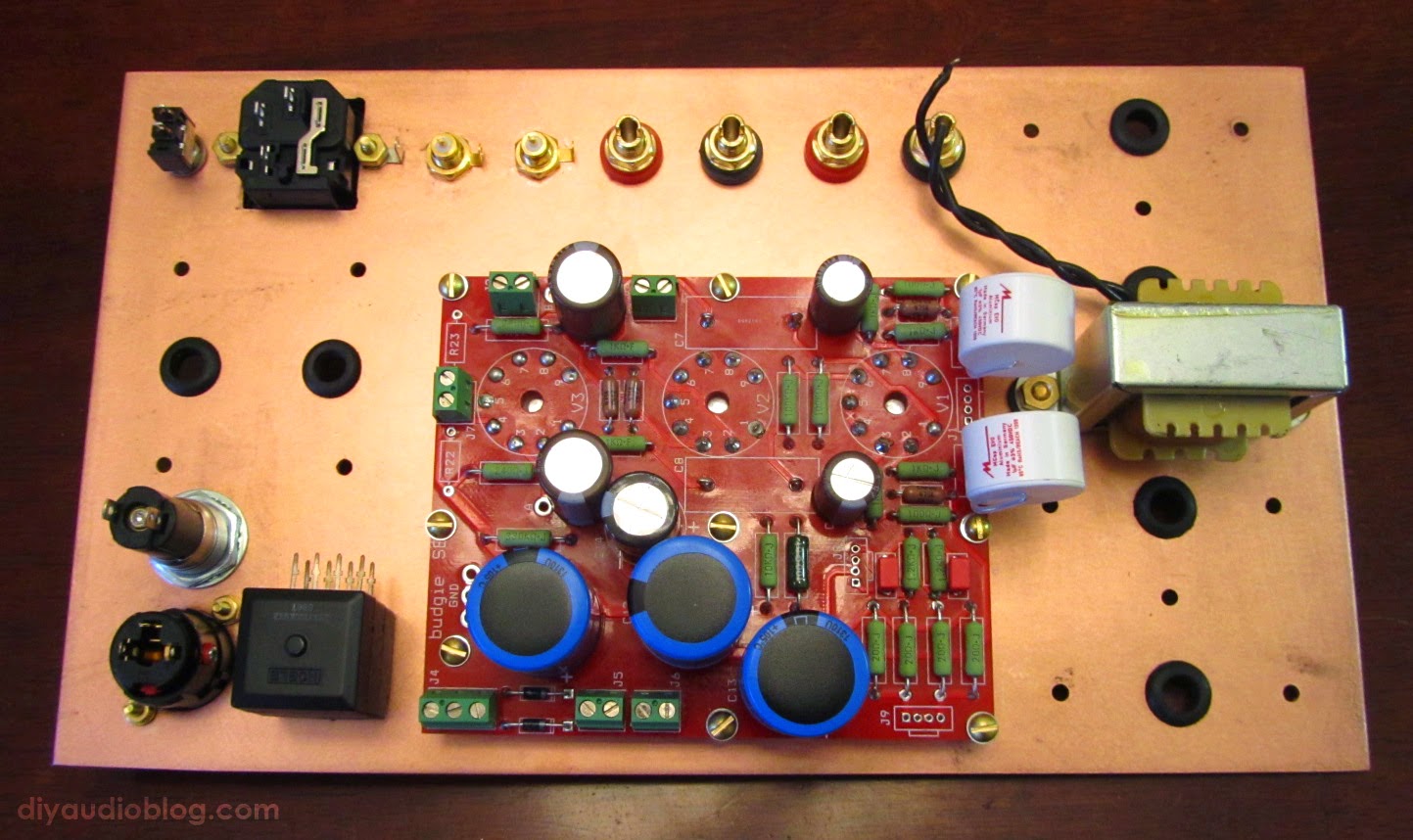 Sitting directly beneath the output transformers are a pair of matched vintage Russian silver mica capacitors. If a manufacturer was making these today, I'm sure they'd be pricey, but given that they are old military surplus, they're downright affordable. Some audiophiles feel these sound comparable to the Russian Teflons, so I figured I'd give them a shot. They are certainly interesting looking little metal brown boxes.


With all the small parts in place, I could secure the Edcor power and output transformers. I purchased some unpainted bells from Edcor (I'd imagine these are popular products on their page for anyone who doesn't want blue) and had them powdercoated with an antique copper color, then replaced the nylon washers and the nickel hardware with brass for a more uniform look. These were secured to the copper chassis with rubber washers to dampen a bit of the vibration they produce.

Since a copper plate cannot sit on its own, a wooden base was fashioned out of some decorative molding from the hardware store, the edges rabbited with a router so the plate could sit on top via "gravity mount", and then mitered to be a perfect fit for the plate. Once the four pieces of molding were secured together with woodglue and allowed to dry, I went through the process of copper leafing and antiquing the wood. If you'd like to see more details on this process, please check out my Bottlehead Crack Coppermine project.

And the photos of the finished unit:

I had a listen with a pair of Sennheisers and really enjoyed the quality of the headphone output. I'll be testing the unit with some speakers shortly. Looks like Shannon has another winner on his hands!


The Fine Print:
Please remember that building circuits and performing circuit modifications can be dangerous to you and/or your surroundings and should only be performed by a certified technician. The owner of this blog and all associated parties can not / will not be held responsible if you attempt a build or modification posted above and cause physical harm to yourself or your surroundings. Many electronics contain high voltages that can kill, and mods, if performed improperly, can be a fire hazard. Please keep this in mind.